Bear with me for the functional analysis. It leads to some interesting results. According to John Beebe, the order of the eight functions for an ISFJ is:

For an INFJ the deciding functions (Fe, Ti, Fi, Te) are in the same positions, but the perceiving functions are in reverse order:

I made a screenshot so you can see it all laid out in columns. I will explain the Demonic/Daemonic language further down. 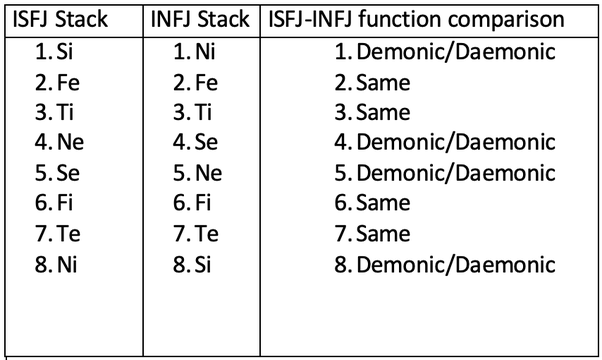 With this type of functional dynamic, you can get a really strong WTF factor. Meaning that you think this person is your best friend, soul mate, and everything’s fine and then it can suddenly be like “Whoah, where are you coming from?!”

The way the two types operate externally is wonderfully similar, especially with matched auxiliary Fe functions. Their primary perceiving functions are very similar in how they process. For example, Si and Ni are both introverted, convergent, seek depth, and take cues from internal sources. They are both perceiving functions that are almost like deciding functions, because they tend to perceive solutions in a complete kind of way. When 1st in the functional stack they both create that J personality which drives more toward completion than exploration of process.

However, the ways they perceive solutions are dramatically different. Much of this has already been explained really well here. Ni is future focused while Si is focused on the past. Ni is quite individual while Si is very collectively focused. Ni is imaginative while Si is concrete.

But one big reason for the WTF factor is that Ni is primary for INFJs and dead last eighth for the ISFJ. Meaning that what is primary in the INFJ awareness is pretty much clueless for the ISFJ.

The opposite is also true. The ISFJ’s primary Si is dead last eighth for the INFJ.

Since the two functions do have similarities many people seem to believe that their primary function does the job for the eighth, so the eighth is not needed. This renders the people who lead with that eighth function as superfluous. It always feels really, really bad when someone sees you as superfluous!

For most people, when you describe their eighth function, they say something like, “What was that again?” This is what my wife says when I describe Si to her. This is what I said for the first few years I read about my eighth which happens to be Ti. I’m an INFP. Doesn’t my primary Fi kind of do Ti too? I believe that common misunderstanding is why Beebe labels the eighth function as Demonic/Daemonic. It’s often that part of you that your conscious ego forgets about and therefore betrays. Therefore, it is pissed off. Imagine being the last of eight children and your parents tend to forget your existence. It’s kind of like that.

Therefore, when you bring an INFJ and an ISFJ together, they just might put each other in touch with the very darkest part of their unconscious personality, which can get really interesting. The auxiliary function, as we know, for both types is Fe. One big attribute of Fe is that it focuses on how “we” do things in terms of social interactions. It’s a very group conscious function. Fe is normally not shy about letting others know how they should behave.

For an INFJ, Fe is subordinate to their own intuition. In other words, the INFJ makes up the rules, usually freely discarding any rule that doesn’t seem appropriate to the situation. For an ISFJ, Fe is subordinate to the Si rules which have already been established by people who have the official authority do so. To see an INFJ break with the official rulebook will look downright sacrilegious to an ISFJ. The INFJs were probably the witches in the Salem witch trials and the ISFJs were most likely the one’s most in favor of doing them in. Big difference.

For the INFJ, their intuitions for how “we” should do things are obvious reality. They are plain as day. It is often baffling that others don’t get with the program. How could the ISFJ not see it the same way? For the Ni user, the traditional nature of Si often seems, well, stupid or quaint. They might be asking, “Why can’t those ISFJs think for themselves?” This type of attitude will, of course, be much appreciated by the ISFJ who generally lives by the wisdom of the tried and true.

The ISFJ and the INFJ might be telling each other, “You just don’t get it!”, baffled by how they once thought they had so much in common.

But if each type can unearth and appreciate their respective eighth functions, and see how those eighth functions are actually incredibly helpful in their own lives, then the INFJ, ISFJ relationship can be pretty awesome. They can help each other make the broadest possible functional leap and add an incredible sense of wholeness to each other’s lives. This is the daemonic, or salvational part of the demon/daemon function.

Together, Si and Ni complete what Beebe calls the religious attitude. This is because religions need both the seeing power of Ni, and the grounded practitioner nature of Si.

As you may have noticed functions four and five have a similar (demonic/daemonic) relationship for the ISFJ and INFJ combination as do the first and eighth. This presents another opportunity for the types to misunderstand each other, but also to “save” each other.